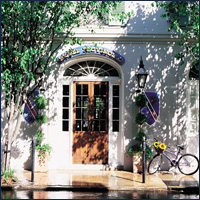 Looking for a last minute weekend getaway? New Orleans is the perfect place because fall has officially found the Big Easy, and it comes complete with a cool breeze and sunny skies.  So it’s the perfect time to head outdoors and explore the city’s amazing sites including Jackson Square and the French Market. Plus there's plenty to keep you entertained this fall.

New Orleans Film Festival October 15 - 22, 2015: New Orleans is known as a premiere location for movie and television sets, so it’s no wonder the city hosts a thriving film festival. Named one of the “25 Film Festivals Worth the Entry Fee” by MovieMaker Magazine, it’s definitely one worth attending. Last year’s festival featured more than 200 films and drew a crowd of 17,000, including 170 filmmakers. Celebrities also regularly attend the festival. The festival is hosted across multiple theatres across the city—but there’s no place better to be during the event to have an authentic New Orleans experience, complete with potential celebrity sightings, than the French Quarter, Hotel Provincial to be more precise.

Krewe of Boo October 24, 2015: Krewe of Boo, New Orleans official Halloween parade will march through New Orleans starting at 6:30 pm. It’s the only major parade with full size floats to travel through the French Quarter.

Boo at the Zoo
October 16, 17, 23, 24, 2015:  Get your little ghosts and goblins ready – Boo at the Zoo is one of the best Halloween events for kids in New Orleans. On select days around Halloween, the Audubon Zoo turns into a Halloween extravaganza for kids under the age of 12.

Nestled in the heart of the French Quarter, we offer an unparalleled paradise with serene surroundings including our charming courtyard, plush guestrooms complete with modern amenities to ensure a comfortable stay, and more. We’re easy walking distance to all of the excitement. Plus, we still have availability.