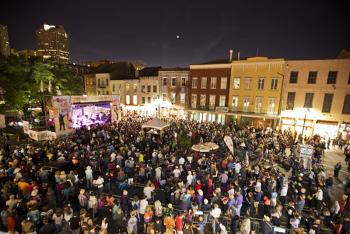 It is the dog days of August in New Orleans and you know what that means? So many things to do! Here in The Big Easy, we don't let the heat keep us down. Almost every weekend in August is full of fun and excitement. Check out our list of some of the lively events coming to New Orleans this month!

A tribute to New Orleans native, Louis "Satchmo" Armstrong, Satchmo Summerfest celebrates its 16th anniversary this year. It will take place August 5-7 right in the center of the French Quarter at Jackson Square. For adults, admission is $5 per day and for kids 12 and under, admission is free. This fee will give you a bracelet that will get you in to all the events throughout the day. And you do not want to miss out on these events! There will be two outdoor stages that feature some of New Orleans top acts, like the Preservation Hall Brass Band and Kermit Ruffins and the Barbeque Swingers. New to the festival this year is the "Back o' Town" stage inside of Louisiana's State Museum Arsenal. Check out the full line-up of musical acts here. And how can we forget the food? New Orleans specialty dishes as well as beverages will be available for purchase throughout the grounds at the fest.

Also going on the same Saturday as Satchmo Summerfest is Whitney White Linen Night, a unique block party in the heart of the New Orleans Arts District, or the Warehouse District as locals like to call it. For about four hours, Julia Street will be closed to traffic. Art enthusiasts can wander freely through the many art galleries while listening to live music outside on the street. There will also be food and drink from some of New Orleans top restaurants available for purchase. It's called "White Linen" night for a reason. As it is summer and very hot, white linen is both stylish and cool. Patrons are encouraged but not required to where as much white as possible. The event is FREE and will be held on August 6th starting at 5:30pm.

On August 13th, one week after White Linen Night, Dirty Linen Night will be held in the French Quarter. Parts of Royal Street and a few other adjoining streets will be blocked off to promote the many art galleries in this area. Some French Quarter shops will be offering special promotions and entertainment during the evening. The event is FREE, begins at 7pm and last for about five hours. See local artists and street music all while strolling through the beautiful and historic French Quarter.

The New Orleans Red Dress Run will take place in the French Quarter on August 13th. This is a uniquely New Orleans event that you do not want to miss! Be prepared to see thousands of red dresses, ranging from beautiful ball gowns to frilly tutus, running through the Quarter. The event starts at Louis Armstrong Park with the actual run beginning at 12:30pm, but runners will start gathering as early as 9am. You can register here. This will get you access to the event, unlimited beer, food and will support over 100 local charities.

Can I get a Who Dat? Our beloved New Orleans Saints will take on the Pittsburgh Steelers in a preseason game on Friday August 26th at the Mercedes Benz Superdome at 7pm. There's nothing like seeing the Saints play at the Dome. The energy is electric! Make sure to come out to Champions Square, starting at 4pm, on game day to tailgate, drink, eat and listen to live music.

Our fine accommodations in a lovely, historic setting are right in the heart of all of these exciting events! Make reservations above or call (504) 581-4995 for reservations and more information.